I Want to Know Christ

I want to know Christ.

That was my thought, more than 40 years ago, after attending the Sunday school class at my church intended to prepare students for profession of faith. For a whole year we studied the Heidelberg Catechism. I suppose it was appropriate that we should know what it was that some of us were about to profess, but I remember thinking, “I don’t want to know about God—I want to know God.”

Decades later, Paul’s statement that “I want to know Christ, and the power of his resurrection, and the fellowship of sharing in his suffering, becoming like him in his death, and so, somehow, to attain to the resurrection of the dead” has become something of a life verse for me. It expresses Paul’s experience of faith, primarily as desire rather than as knowledge. It addresses the heart more than the head.

The Reformed tradition, in which I was raised, has for the most part been somewhat headstrong. That is, it has tended to separate head and heart and emphasize the intellectual aspects of the faith. But it has also been headstrong in the sense of willful or obstinate, not inclined to give our hearts to Jesus. Or maybe that’s just the natural state of humanity.

These meditations were originally written for a group of people at Calvin University working on web projects including CCEL.org, Hymnary.org, ZeteoSearch.org, and others, for our Tuesday morning prayer. Thus you may notice them cycling through the church year according to the Revised Common Lectionary, nearly three times. You can meditate on them by yourself according to your own schedule, or you can use them in a group setting, perhaps doing Lectio Divina on a scripture passage and then reading and discussing the meditation.

These meditations are released under a creative commons license; you may copy them freely.

When I pray, and I start out meditating on a Bible passage, sometimes I can’t concentrate. My mind wants to wander. I may be thinking about good things, but I just can’t make my mind focus on what I’m reading. It’s like a mental fog.

Sometimes when I pray I remember something I’ve done in the past or thoughts I’ve had or things I’ve wanted, and I see how far short I’ve fallen, and I can’t stand myself. I want to die. 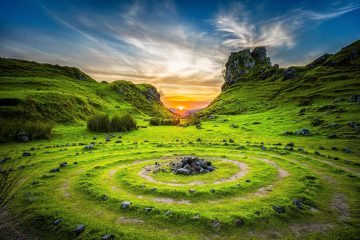